An adventure game set in 1980s Japan, following a young man's search for answers about his father's murder. Written, produced and directed by Yu Suzuki, the game was critically lauded for its ambitious scale; it pioneered features like urban sandbox gameplay, interactive environments, real-time weather, and QTEs.
European Cover 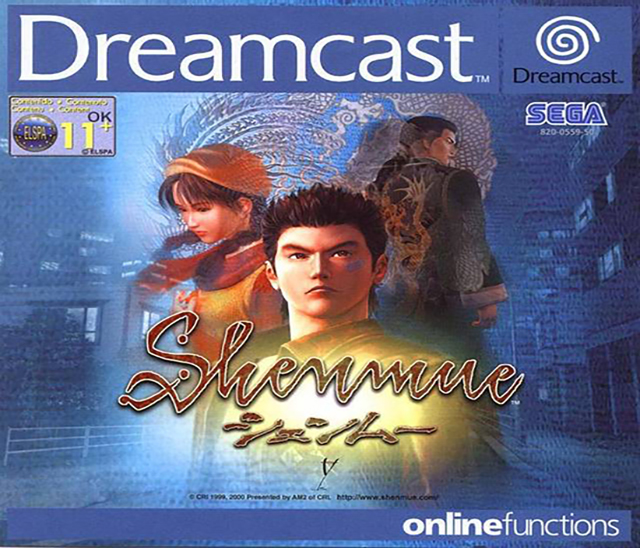 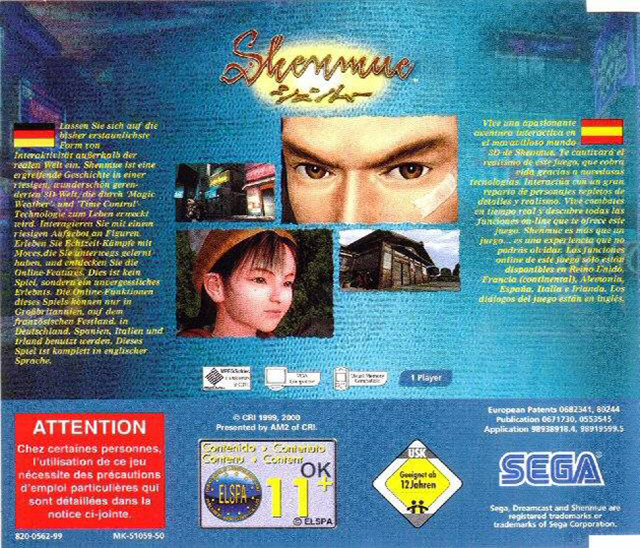 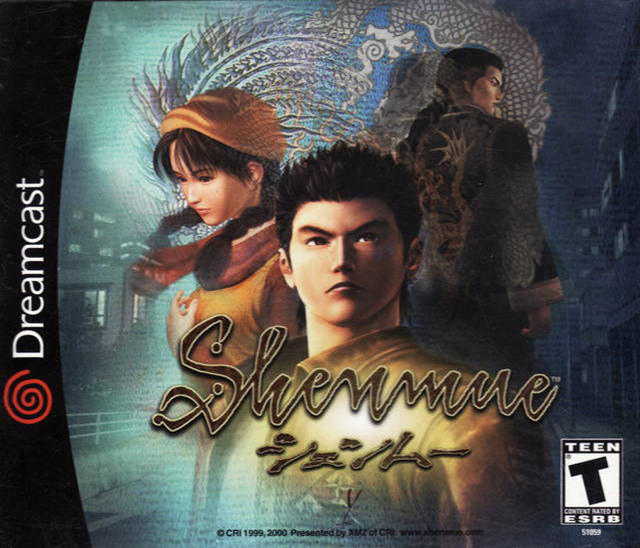 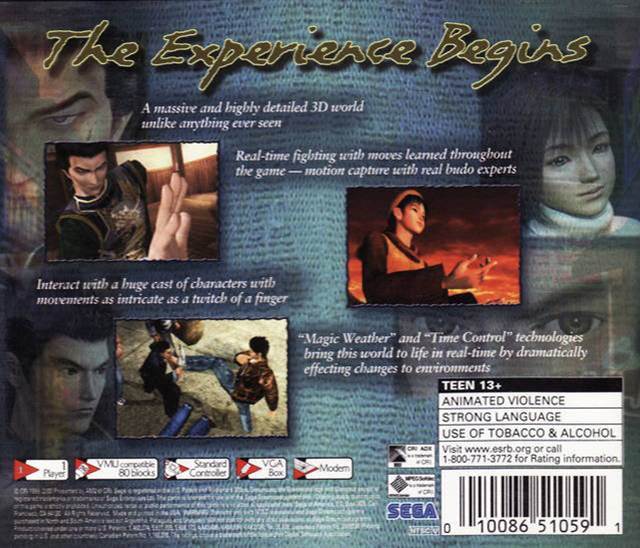 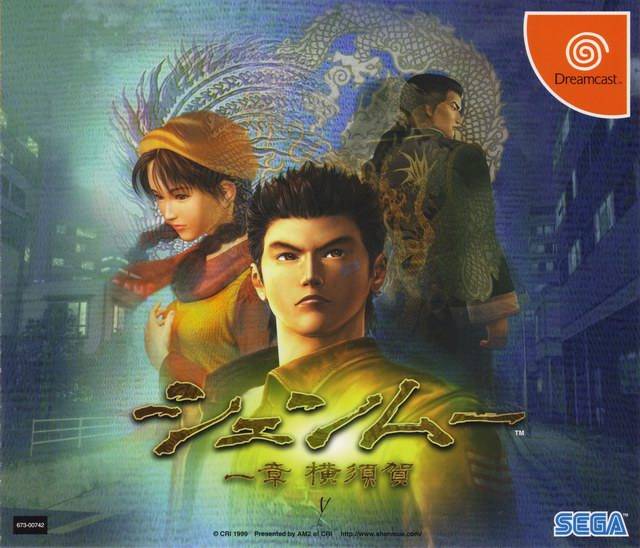 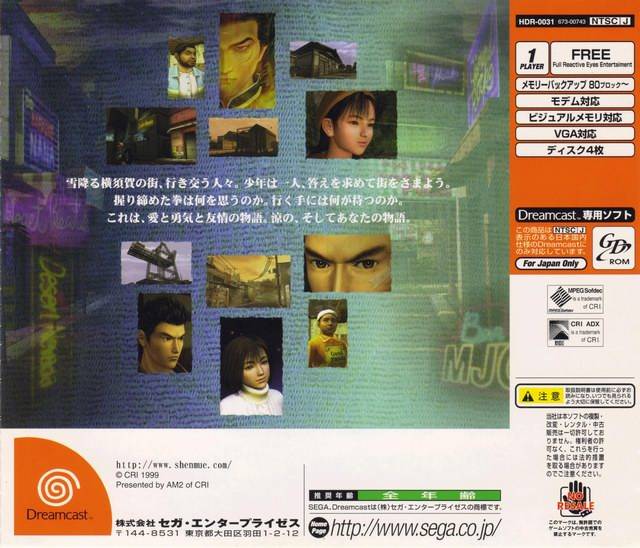 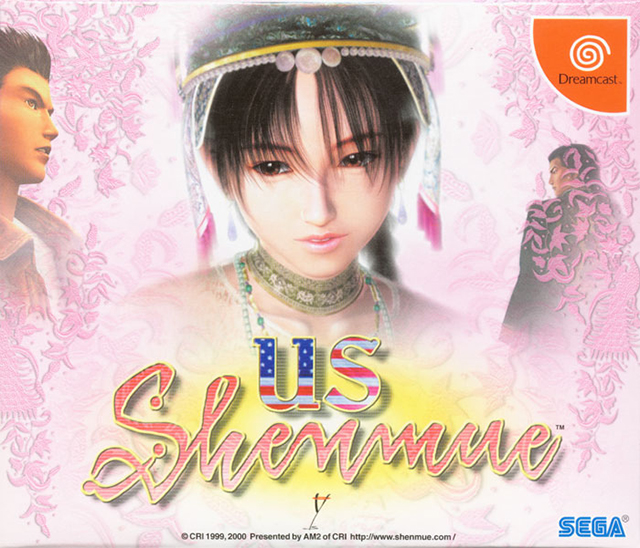 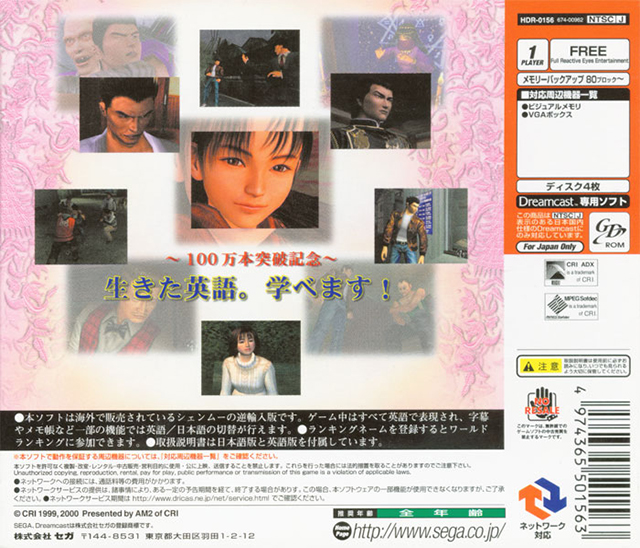 The story of Shenmue begins on November 29, 1986, in the perspective of the protagonist Ryo Hazuki (芭月 涼 Hazuki Ryō) returning home to his family dojo to witness his father, Iwao Hazuki, battling with a tall, ominous man dressed in a green silk Chinese suit known as Lan Di. He demands Iwao hand over an item known as the “Dragon Mirror”, though Iwao refuses to reveal where it is. Ryo intervenes in battle after his father is felled, but is injured by a blow from Lan Di. He then lifts Ryo from the ground and threatens to kill him with a final blow, which prompts Iwao to reveal its location underneath the cherry blossom tree.

After Lan Di’s henchmen recover the mirror, he mentions a man called Zhao Sunming, who was allegedly killed by Iwao in Mengcun. The two then engage in combat for the last time, as he wishes Iwao to die “like a warrior”. Lan Di finishes the fight with a deadly blow, and he and his party then leave. Iwao dies shortly after in Ryo’s arms, which fills Ryo with the desire for revenge above all else. After a few days of mourning and resting from his injuries, Ryo begins his journey to track down Lan Di to avenge his father’s death.

Ryo’s first clue is a car that some of his neighbors saw on the day of the murder. Though his leads are few and far between, Ryo slowly makes progress in his investigation by interviewing people all over Yokosuka. Just as he is about to run out of leads, a letter from a man named Zhu Yuanda suggests that he seek the aid of a certain Master Chen, who works at the harbor. Through Chen and his son Guizhang, Ryo learns that a local wharf gang known as the Mad Angels is connected to Lan Di’s crime organization, The Chi You Men. Ryo also learns that the Dragon Mirror stolen by Lan Di is part of a set of two stone mirrors. After much investigation, he locates the second mirror underneath his father’s dojo, dubbed the Phoenix Mirror and decorated with a phoenix.

Ryo takes a job on the waterfront in order to learn more about the Mad Angels gang, and eventually he causes them enough trouble that the gang kidnaps his friend (and principal love interest) Nozomi Harasaki. Ryo rescues Nozomi, but makes a deal with the Mad Angels leader, Terry, to beat up Guizhang in exchange to take Ryo to Lan Di. Ryo fights Guizhang in a tough battle, but after realizing Terry betrayed him by attempting to kill them, Ryo teams up with Guizhang to defeat all seventy members of the Mad Angels gang. Upon defeat, Terry reveals to Ryo that Lan Di has left Japan for Hong Kong. With the aid of the Chen family, Ryo is arranged to take a boat to Hong Kong. On the day of his departure, Ryo is suddenly attacked by Chai, a low ranking Chi You Men member who has been following Ryo throughout the game wishing to acquire his Phoenix Mirror to gain the favor of Lan Di. Chai injures Guizhang and Ryo engages in a battle with Chai and defeats him. Guizhang, who planned to accompany Ryo to Hong Kong, urges Ryo to go ahead without him and Ryo is instructed by Master Chen to seek out the help of a master of the Chinese martial arts located in Wan Chai named Tao Lishao. Ryo boards the boat and travels to Hong Kong in pursuit of Lan Di, concluding the first chapter of Shenmue.

Gameplay in Shenmue is diverse; while most of the game is spent walking around the Japanese locations in a third-person ‘chase cam’ mode (talking to people, searching for things, and so forth), it is interspersed with many minigames, including forklift and motorcycle races, bar fights, chases down crowded alleys, full versions of Sega arcade games Space Harrier and Hang-On (both originally programmed by Shenmue creator and director, Yu Suzuki), dart games, and fighting sequences.

During the majority of Shenmue, the player will explore the Yokosuka area usually for any leads to progress the narrative. Often, these leads will be gained by talking to local people who can provide important clues. If the player so desires, they can explore the area simply for fun without progressing the game’s narrative. Furthermore, talking to a variety of local people that although will not progress the narrative, can greatly enhance the player’s understanding of the plot and/or gameplay mechanics. There are also several side-quests for players to engage in throughout the game. These will not affect the main narrative, but might provide Ryo with useful items or further develop characters and storyline for the player. Items collected and martial arts skills leveled up in the first game could be imported into Shenmue II after completing the game.

During quick time event (QTE) sequences, a button will flash on screen briefly and the player must press the relevant button or combination of buttons to trigger Ryo’s actions. Fights against opponents can take place in QTE form as frequently as in Free Fight form. In addition to battles, QTE sequences are used for various other scenarios. For example, at one point a QTE sequence is used when Ryo must chase an escaping crook and Lan Di associate who has stolen money from him. The sequence takes place in the middle of a busy town center, and a variety of incoming obstructions must be avoided. As the game progresses, the reaction speeds required of the player become quicker and the button combinations become more complex. The player’s success or failure in these scenes can affect the flow of gameplay as well as the current cutscene.

The battles pit Ryo against one or more enemies. Ryo has a large list of martial art techniques. The player has the ability to enter a practice mode of sorts, in which Ryo will practice his various martial art techniques, either alone or with a friendly opponent – this helps to increase the player’s familiarity with the battle system. While progressing through the game, players have the ability to learn more techniques, adding to Ryo’s repertoire and ultimately making him a more powerful martial artist. There are several senior martial artists that Ryo meets throughout his journey, and they offer to teach him new skills. The player has the choice to decline these offers. Another method for learning new techniques involves Martial Arts Scroll Rolls. These antique instructional scrolls can be found, or purchased, at various locations in the game. Once Ryo has read the scroll, the technique will be added to his repertoire, but the player will need to practice the key combinations it requires to truly master it.

Shenmue incorporates a system to produce the game’s in-universe weather conditions. Named the Magic Weather System, it is one of the most important elements responsible for creating the game’s universe. For every day that the player progresses through, weather conditions are randomly generated. Conditions vary from rain, to snow, to overcast skies to sunny and several other variations. Furthermore, weather can change throughout the day – for example, a rainy morning followed by an overcast afternoon and evening. The weather has direct impact on how the game looks – on a rainy day, people are walking around with umbrellas, and on a snowy day, the street is covered with snow. The conditions generated are reflective of the season in which they take place. In addition, records of actual weather conditions of the Yokosuka area during 1986/1987 (the time period in which the game is set) were implemented into the game, giving players the option to experience these weather conditions as opposed to those which are randomly generated

Yu Suzuki has stated on several occasions that during its early stages, Shenmue was a traditional style role-playing video game based on the characters and storyline of the hugely successful fighting game title Virtua Fighter. The Ryo character was originally Virtua Fighter character Akira. The final Ryo character has several key differences, but there is a very clear visual resemblance between him and Akira. As the game’s development progressed, the characters became original and the storyline moved away from its Virtua Fighter roots.

Initially, Shenmue was planned as a killer application for the beleaguered Sega Saturn. Although it was very powerful for its time, the Saturn was also notoriously difficult to work with and progress was painstakingly slow. Yu Suzuki has stated how gruelingly difficult it was to get the most from the Saturn, but that he is very proud of the visual quality he was able to achieve on the 32-bit system. The project started on Saturn as a mix between Virtua Fighter and a role-playing game,but following the console’s commercial collapse internationally, the project, on which AM2 worked for almost two years, was halted. However, Sega was already beginning work on a brand-new console (which during the early stages of its development was called the Katana, later renamed to its commercial name “Dreamcast”) and work on Shenmue quickly resumed, with the new system as its format. “Katana” brand cigarettes can be found throughout the game, as homage to the former name.

At the 2014 Game Developers Conference, Yu Suzuki presented a Shenmue postmortem revealing many detailed development stages that has led up to the creation of Shenmue. It was revealed that before Virtua Fighter RPG, Suzuki created a Sega Saturn prototype named ‘The Old Man and The Peach Tree’ that was set during 1950s China with the story following a man who wanted to find a martial artist named Master Ryu. ‘The Old Man and The Peach Tree’ would be the basic foundation for Shenmue.